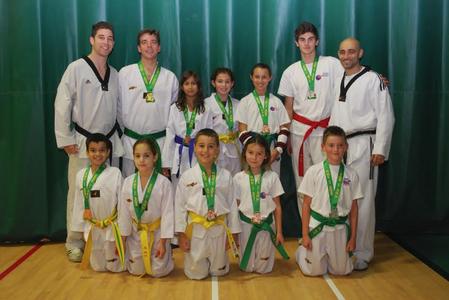 Julia Shahak (age 10), yellow belt, won gold in her first competition after defeating two opponents with a score of 10-0 and 4-3 respectively. Her second opponent was considerably taller and nearly a full belt higher. Eric Beaudry (age 43), green belt, fought in the 35+ division and won gold with a score of 4-2.

Austin Brown (age 9), green belt, won silver after three action-packed fights. He won his two first fights by a wide margin of 7-1 and 9-3 respectively. In the final fight, Austin was trailing by 1one point but in a flurry of kicks to regain the lead, he received two pricey kicks to settle the final score at 4-8. Victoria Shahak (age 8) won silver after two excellent fights. She beat her first opponent but lost in the gold medal match. Geremy Trudel (age 17), red belt, received a silver medal after a high intensity match.

Blue belt brothers, Manny (age 12) and Dean Bizogias (age 14) both received silver medals. Manny won his first fight with a score of 18-11 despite a gruesome toe injury. He continued to win a second fight against a new opponent with a score of 12-3. He fell short in the third and gold medal match with a final score of 6-12.

Alexa Dustin (age 8), green belt, won bronze after a furor of alternating kicks and points between her and her opponent. In the final seconds, her opponent took the lead with the final score at 18-28.

Mia Campione (age 11), green belt, won bronze after winning her first fight, but losing a closely matched second fight. Her brother, AJ Campione (age 7), yellow belt, also won bronze after competing for the first time. While he didn’t win, he thoroughly had fun. Grinning from ear to ear, he provided an admiral example of good-sportsmanship for which his school is proud. 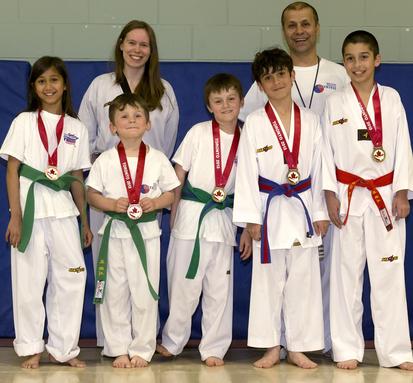 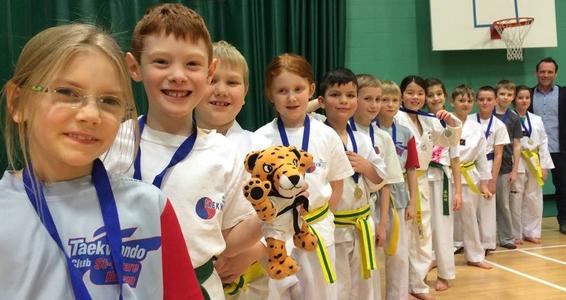 Gabriel Milner, yellow belt green stripe brought home a silver medal after sparring with another equally matched teammate, Emeric Lecompte. Well done! Thank you to the parents for your continued support and special thanks to Woots restaurant for hosting a celebratory lunch.

All competitors showed excellent drive and a display of good sportsmanship. Congratulations to all athletes! ​